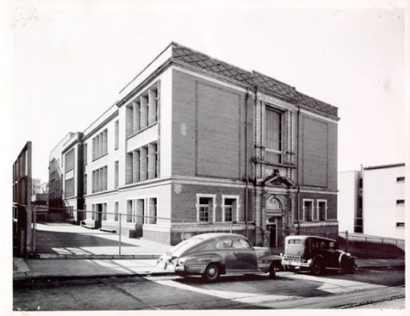 Spring Valley is the oldest school in California which was founded in 1852. It was among seven schools established during the Gold Rush days when California was admitted to the Union in 1850. Spring Valley is now the only school left operating of those original seven schools. The current building was built after the 1906 Earthquake and Fire. The name refers to the underground springs found in this area. Some famous alumni we know about are: Lotta Crabtree, Cyril Magnin, Hank Luisetti, Judge Leonard Louie and Jascha Heifetz.

Spring Valley was embroiled in an infamous educational discrimination case in the 1880’s.  Mamie Tape, a Chinese girl born in America, was not allowed to attend Spring Valley when her parents tried to enroll her in 1884. The San Francisco Board of Education created a “separate” but unequal school for Chinese students instead although the Tapes won their lawsuits for equal treatment through the Supreme Court in California. It would not be until the hard fought civil rights efforts of African Americans in the 1954 Supreme Court decision of Brown v. Board of Education that this doctrine of segregated school is finally recognized as inherently unequal. This piece of Spring Valley history serves to teach our children that the freedoms that we enjoy in America are the result of courageous stands made by those before us who sought equal opportunity for all.