“As a school district we use many measures for how well we are preparing our students for college, careers and life, and graduation rates are one of those important data points,” Superintendent Dr. Vincent Matthews said. “Even though we had to make a shift to remote teaching and learning for the second half of their final semester when the pandemic began, the hard work of the class of 2020 as well as teachers and families have contributed to our steady positive upward trend of our rising graduation rate.”

Over the past decade, SFUSD has developed and implemented systems to better identify and track the progress of students towards graduation including the development of on-track off-track measures for early intervention. SFUSD has also implemented a portfolio of credit-earning options for students so if a student needs to make up a course, they can do so without falling further behind.

The graduation rate overall and for most subgroups is higher than the state and has increased from last year*. To view detailed results, visit the state’s website or see table 1 below.

In addition, for program subgroups, the graduation rate increased from last year to this year for English Learners, Foster Youth, Students with Disabilities and Socioeconomically Disadvantaged Youth. Foster youth as a whole showed a larger increase than the district average (68.8% to 77.3%).

CDE also reports data on other metrics for this cohort of recent graduates (see Table 2). 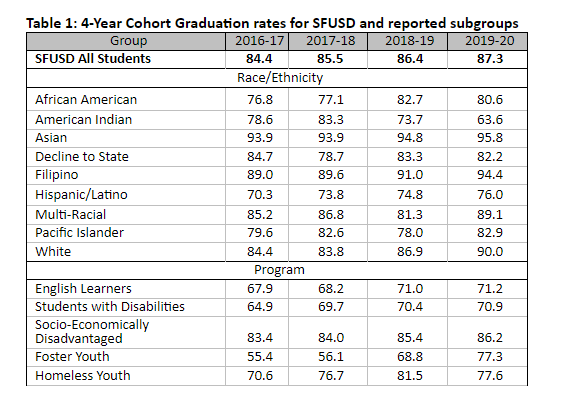 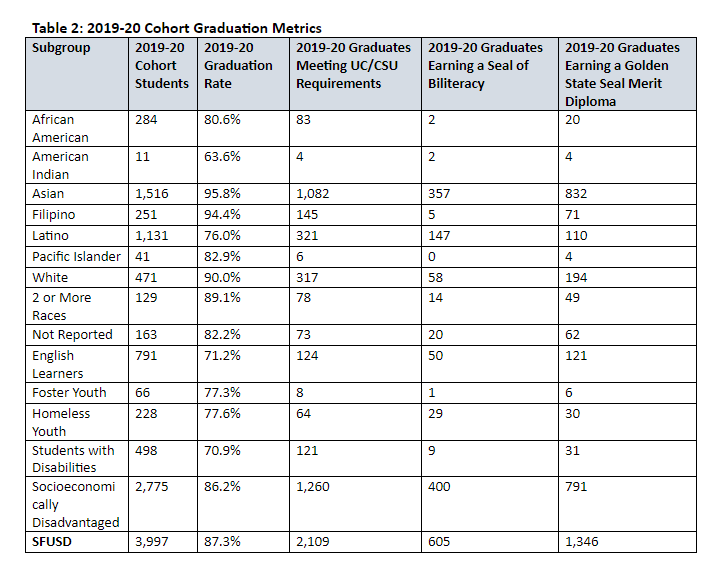