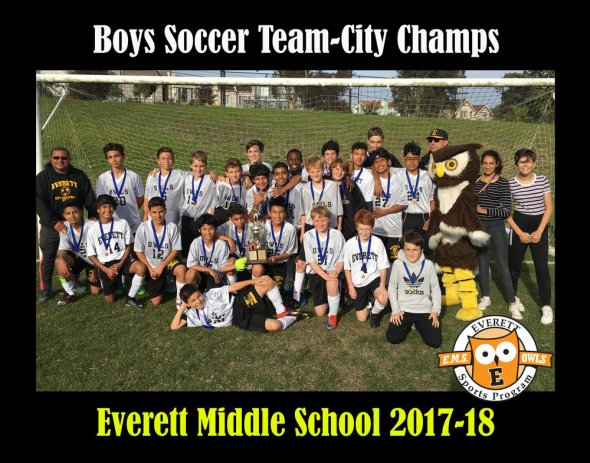 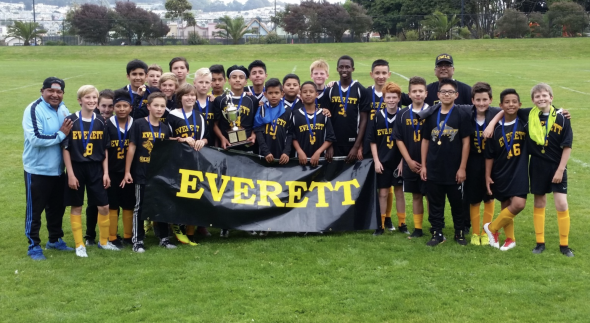 The AAA Middle School Boys Soccer final was held October 20 at Boxer Stadium with Everett besting Visitacion Valley 4-1. Both teams tallied one goal in a hard fought first half (Brandon Giron of Vis. Valley and Andy Fuentes of Everett). After the break, Everett came out on fire with a quick goal in the 33rd minute (Michael Garcia). Unfortunately the larger pitch and a small Falcon roster combined with the fresh legs and frequent substitutes of the Owls wore down the Vis. Valley squad, allowing Everett to push across two addition goals in the 52nd minute (Josue Francisco) and 59th minute (Andy Fuentes) to seal the victory. The title is the second in four years for the Owls and sixth overall. Congratulations to both schools on putting out a full effort on the field and for very successful seasons overall.

The AAA Middle School Boys Soccer championship was held October 9 at Boxer Stadium with Everett downing Presidio 2-1. The Panthers scored first on a goal by Matthew Wilson in the 11th minute and taking a 1-0 lead into halftime. The second half, however, was dominated by the Owls as they scored twice on tallies by Logan Tracy in the 32nd minute and what proved to be the game winner by Patrick Zamora Salazar in the 41st minute. The victory earned Everett their second straight title and eighth overall. Congratulations to both teams on a very exciting championship match and successful seasons on the pitch!