LINCOLN BOYS’ GOLD HAD HOPES TO FINISH OFF STRONG THIS SEASON

With the cancellation of the spring season announced by CIF San Francisco, golf games and practices are to be held off through the end of the school year.

The new spring season has gotten the boys’ golf team pumped up and in high hopes of making it to the City Championships this year. Hoping to beat longtime rivals Lowell and Washington, the team has plans to keep a regular practice schedule and have consistent performances throughout their matches.

“Since some schools like Marshall don’t have a team due to a lack of players this season, I feel like the Lowell and Washington golf teams this year would be the real challenges we have to face,” says Joseph Sarabia, team captain of the boy’s golf team.

The Lincoln boys’ golf team has been very formidable in the past couple of years, usually hovering in second and third place in the final standings. Having upset Washington to earn a spot in the CIF championship in 2019 but losing to Lowell with an overall score of 463 to 417 in the championships, the boy’s golf team hopes to rev it up this spring season and finally win the championship.

Team consistency is essential in golf, as high school golf is formatted in stroke play, a scoring system in which the total number of strokes from each player is added to create an overall score over one or more rounds of nine holes. The team with the lowest overall stroke score wins the match, meaning that everyone has to pull their weight and score as low as possible when it comes to these matches.

Duke Janza, a veteran of the boys’ golf team, says, “I think that if we can improve our swings and work better as a team on the course, we have a good chance of going all the way [to the championships].”

In terms of personal goals, Sarabia states, “I just want to get better, lower my strokes, and try to help the team win our matches as much as possible.”

Janza, having a similar mindset, hopes “to play better and win the championship.”

Unprecedented events may have also put a stop to the 2020 spring sports season as COVID-19 has spread throughout the U.S and to San Francisco. The news of the pandemic feels disheartening as many on the team want to play the season out.

With the recent spread of the COVID-19  in San Francisco, the SF Department of Public Health has canceled all non-essential events at all SFUSD schools. Non-essential events include sports, so games and practices are to be canceled until further notice by the district.

Fears of the spring season as a whole potentially being withdrawn has brought many sports teams to a halt and has worried many high school athletes who wish to compete this season.

“I think (the shutdown of non-essential events) will affect our team’s performance because not being allowed to practice will make it very hard for our team to keep its level of skill where it is right now [...]. If the ban is not lifted, it may mean that our season is canceled,” says Janza, worriedly.

The volleyball season started around late January and with a score of nine wins and two losses, Lincoln’s boys varsity volleyball team is off to an outstanding start. However, news of COVID-19 quickly spread around the Lincoln community. All the school districts in California are taking strict safety measures to lower the risk of infections. Lincoln’s boy’s volleyball team received news late afternoon Monday, March 9th that all of their practices and future scrimmages are canceled due to safety precautions of COVID-19, which has been recently declared a pandemic. As of March 9th, Abraham Lincoln high school announced that all schoolwide activities such as club meetings, advisory meetings, and especially sports meet are postponed until further notice. Upon this news, the boy’s volleyball team activities are withheld.

The delay in volleyball activities will surely impact this season because the lack of practices would affect their performance and ability.

“For me, I think that the cancellation of practices and games really affects the team because we have less time to practice and less time to build our team chemistry. I also think that it’s extremely hard for the team considering that we only started our preseason.” said senior Kenneth Chung of the varsity boy’s volleyball team.

By the time things settle down with the outbreak of COVID-19, the season for volleyball might be over. Not only will activities be restricted, so will their resources to practice but this doesn’t deter them from getting their daily workout or individual practices.

“...because all gyms and facilities are closed, we try to encourage all members of the team to work out individually at home and stay fit, whether it’s doing push-ups at home, playing with a ball, or going outside for runs.” said senior varsity boy’s volleyball member, Anthony Trieu.

With the shelter in place and social distancing in effect, there are limited, but possible ways to go about their daily activities; just not with a group.

The volleyball season might be on hold because of COVID-19, but it doesn’t stop the varsity boy’s volleyball team from doing their best by being diligent and practicing on their own. After all, the most important thing is for the team to stay safe and healthy when they return to school.

Anthony Trieu stated, “the cancellation of volleyball practices and games might have disappointed everyone for the time being, but we are all still hopeful that we will get through this pandemic and hopefully resume school, practice, and games.”

VICTORY IS REVOKED FROM THE CHAMPIONSHIP-BOUND BOYS SOCCER TEAM 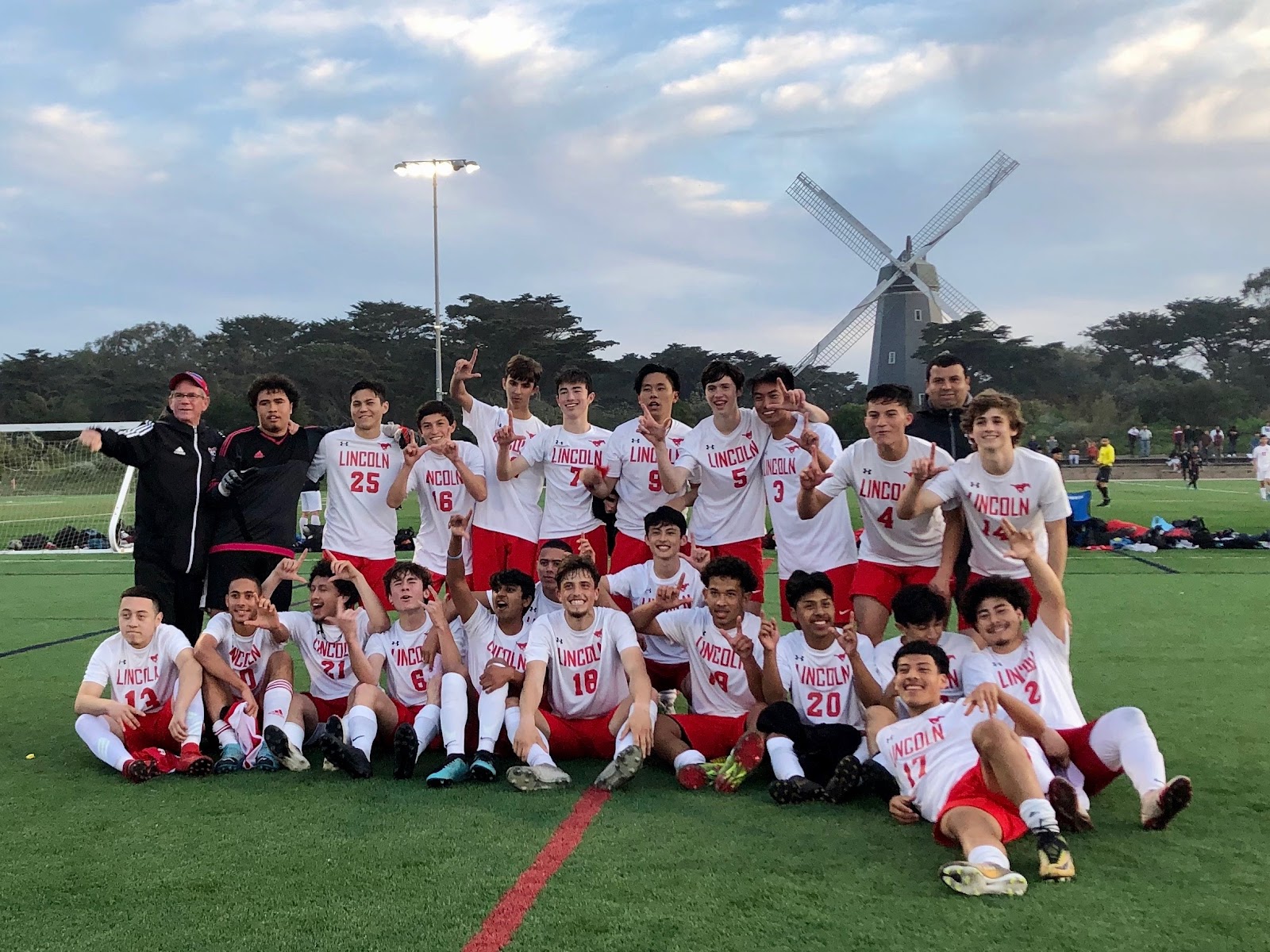 The boys soccer team cheerfully hold up L’s for “Lincoln” after their win against Lowell on that Thursday. Photo Courtesy of Josef Vandongen

On Thursday, February 27th, the Lincoln boys soccer team rallied to play against Lowell high school in the city playoffs and triumphed. However, the next morning they learned that this monumental step towards the All-City soccer championship title, trophy, and victory would be revoked, handing their win over to the Lowell team.

Senior team captain, Martin Koulikov and fellow team member, Josef Vandongen, provide the inside story, explaining how the team had two previously ineligible players (Michael Ramos and Lino Solano) who became eligible with GPA 2.0 or above, to play that Thursday. The team then checked in with Athletic Director, Kevin Grayson, who mistakenly gave them the go-ahead, misinforming them that those two players were fine to play in the playoffs when actually, their new grades would go into effect for eligibility the following day (Friday), meaning that they were still technically ineligible during that Thursday game.

“The whole team was hyped because we wanted the two players,” stated Koulikov, proceeding to explain how AAA, the soccer league in which the Lincoln team plays for, ran a grade-check scan before the championship game.

At the playoff game, Lincoln’s coach conversed with Lowell’s, who noticed two new players whom he had not seen before. According to Koulikov, Lincoln’s coach explained to Lowell’s that the two new faces had just been made eligible to play, which ended up not being true due to Grayson’s misconception.

“We haven’t had a soccer championship at this school for eighteen years, so we would have thought this year would have been really cool and special because, for our class of 2020, all of us were born 18 years ago pretty much. So it’s like we were born to bring the fucking championship home. It would have been a cool little story…” says Koulikov.

Of the ineligible players, Koulikov says the mistake was not their fault at all. “If anything I appreciate them being so eager to get their grades up.”

Koulikov says that after the revocation of the team’s win, he did not show up to school for two weeks due to how upset he was.

Fellow team captain, senior Carlo Malig, describes how he felt after receiving the news as “speechless” and describing the situation as “definitely heartbreaking.”

Malig says he does not believe that the situation was fair because the rule that disqualified the team had to do with eligible grades, and that’s what every player had.

Addressing Grayson, Malig says both he and the team regard his mistake as an “unforgivable error” stating that because of this incident, both students and parents will be monitoring his work much more moving forward.

As a message to Grayson, Malig asks him to please take his time to make sure student-athletes are in a secure environment. “They shouldn’t have to worry about these types of things. I wish you the best and I hope you can take better care of the future athletes of Lincoln.”

Speaking on the recent changes the COVID-19 outbreak has brought upon schools, Malig states that the pandemic has “ruined many seasons for athletes this year and I can only say that I’m grateful to have had my season before this incident. It’s heartbreaking to see other seniors not being able to play for their last year.”

On behalf of both himself and the rest of the team, Malig says he wants both the public and students at other schools who may have the wrong idea to know that the Abraham Lincoln soccer team deserved the championship without a doubt. “We worked so hard and put in so much effort both on and off the field to get to the position we were at. [I] will forever be proud of my team, and as cliche as it sounds, those boys are my family.”

David Reardon, program manager for the SF Youth Soccer League, provides detail, explaining how the ineligible players’ grades were on track to being cleared eight hours before the game. When it was discovered that they had not yet been cleared, Lowell’s head coach, Coach Juan, pointed out the players’ ineligibility. Don Collins, Athletic Commissioner for AAA, then reversed the 1-0 victory and handed the win to Lowell.

According to Collins, the Lincoln team acted with honesty and integrity, stating that they are “an honorable program who made an error.”

Kevin Grayson, Athletic Director for the Lincoln team who held the responsibility to make sure the players’ passing grades were eligible for that Thursday’s game, says he “takes full responsibility for what happened,” describing the situation as “sad and disappointing.”

“A rule is a rule, and we didn’t follow the rules,” Grayson states, saying that moving forward he will not make the same mistake twice even though, according to Koulikov, it was not his first time making the mistake.

Reflecting on his vague responses, Grayson’s demeanor when being interviewed was reluctant and sheepish.

Both soccer boys and girls have advanced to the 1st round of CIF SF playoffs.

Winners advance to semi-final matches February 27 where top two seeds Lowell and Mission await. Lincoln girls AND boys are back in the semis after the girls won 3-2 in OT today and the boys won 1-0 in the first round of the playoffs! Well done!

Both teams have a date(Thursday 27 Feb 2020) with that other L school to determine who goes to the big show. Girls at Crocker and boys at Beach Chalet. 3:30pm