With a rate of 84.9 percent compared to the state rate of 82.3 percent, SFUSD has a higher graduation rate than the state average for students who started high school in 2011 and graduated in 2015.

"When more of our students are graduating it's like the Warriors winning a game,” said Superintendent Richard Carranza. “It shows our team of educators, parents and community partners are working together to ensure students score. And, we've even raised the height of the basket with more college-ready graduation requirements. This is indeed cause for celebration. When graduation rates rise everyone wins."

This is the first cohort where some students were identified through SFUSD data to be at risk of not graduating.  SFUSD created a system in 2012-13 to identify students who were not on track to graduate and provided additional academic and social-emotional supports. Schools tracked student progress toward graduation over the full four years. See figure 1 for year-by-year analysis.

"With more San Francisco students graduating ready to pursue their dreams in college and careers, SFUSD has a lot to be proud of,” said School Board President Matt Haney. “We set higher standards for graduation and provided the support for our students to meet a higher bar, and they did." 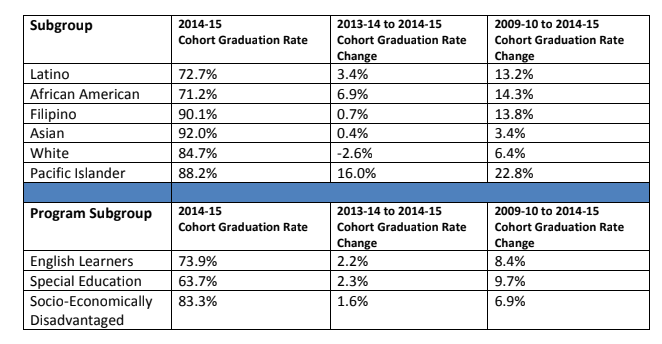 SFUSD requires that all students complete the A-G course sequence in order to graduate.  For SFUSD, approximately 60 percent of students completed the course sequence with a C or higher. SFUSD students may still graduate with a grade lower than a C, but they will not meet the eligibility requirements for entrance into a California State University.   The statewide rate of A-G completion with a C or higher is 43 percent.

San Francisco continues to be one of the highest-performing districts compared to other similar districts while maintaining more rigorous graduation standards.

How the rate is calculated

The 2014-15 cohort data released by CDE provides four-year graduation and dropout rates for all entering 9th graders in 2011 – 12 for all districts in California.

Academy of Arts and Science

Ruth Asawa School of the Arts

Double-digit increase of 25.3 percent for African-American students and 11.6 percent for Latino students over the past 5 years