By: Ella Fino and Georgia Payne 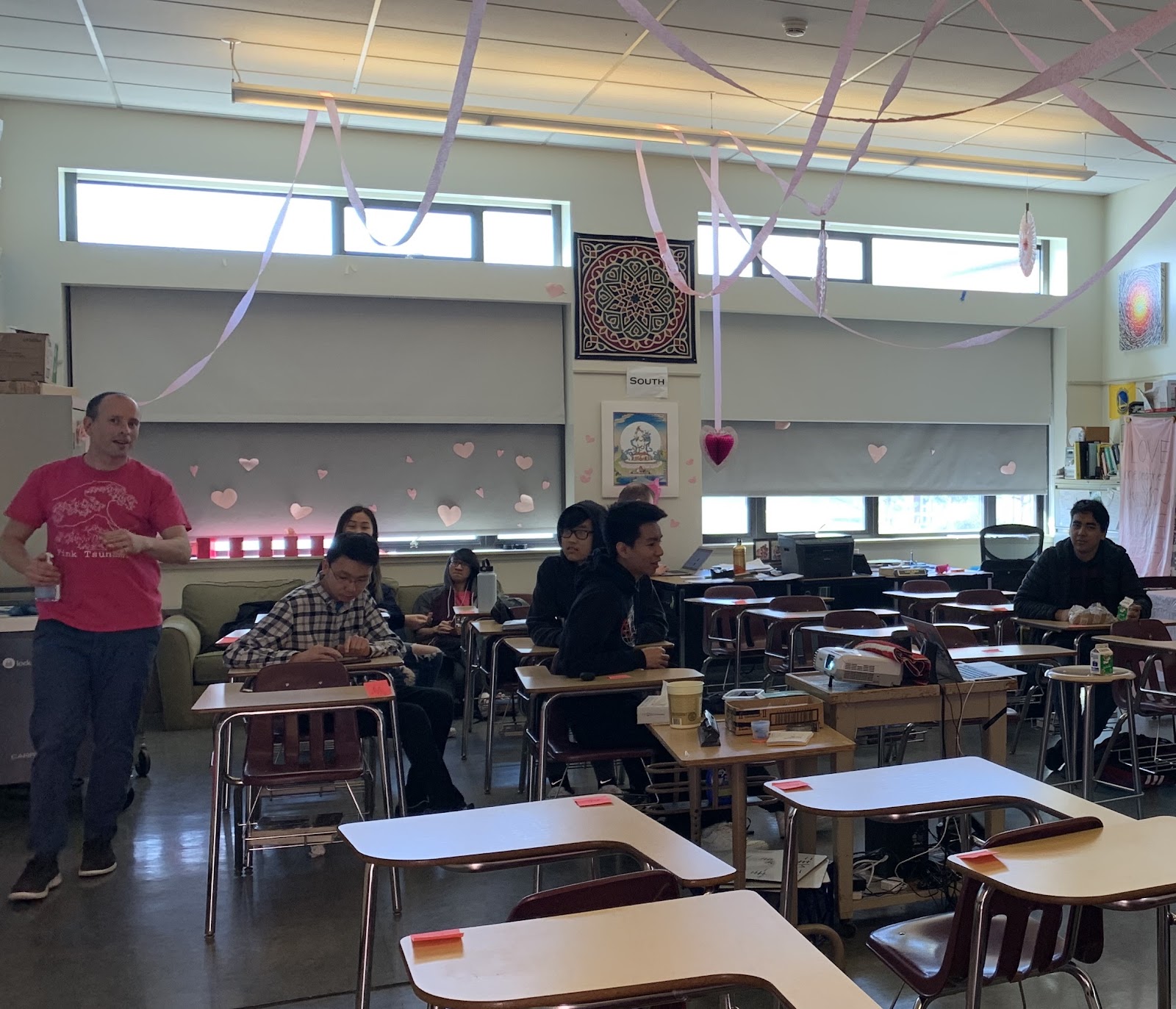 Mr. Sultan engaging with his students in his streamer-covered classroom on Lincoln’s Pink Tsunami spirit day. Photo by Laniya Cheatum

Mr. Sultan teaches AP Human Geography, which he defines as, “the study of human activity on the earth from a spatial perspective.”

When it comes to education, the importance of a good teacher cannot be underestimated. Sultan is the epitome of a high-quality teacher -- his teaching style is engaging and dynamic. His class is not easy, but with all the resources Mr. Sultan provides for his students, you will be able to retain immense amounts of information over shockingly-short periods of time. If you would have told me I would be able to memorize the entire world map in a few weeks, I wouldn’t have believed you. But with the hard work and dedication Mr. Sultan puts in each and every day, every student can accomplish this feat and so much more.

Senior and former AP Human Geography student, Logan Hernandez, describes the class as “great not only because of the content but also [because of] his teaching style...he sticks to a schedule for each unit and it’s helpful to know what’s going on in the future.”

Some of Mr. Sultan’s priorities are inclusivity and equality amongst his students. He teaches all different kinds of students: those who have taken every possible AP class, and those who have never taken an AP class in their high school career. He makes sure his class is both challenging and enjoyable for each student. Afterschool review sessions, group discussions, and practice essay questions are just a few of the helpful resources he provides to ensure all his students have equal, enriching learning opportunities. This is noticeable in his everyday teaching. Mr. Sultan doesn’t just lecture; he engages. He connects. He genuinely cares about his impact on his students’ lives.

Sultan explains, “I wanted to teach an AP class that was open and welcoming to students who don't normally take AP... I think everyone should have the opportunity to take an AP class, be challenged and step up to the challenge.”

“I like to inspire my students, challenge them, and also learn from them. My students have really opened my eyes throughout the years to so many new things. It helps me to keep an open mind, stay young at heart and keep current with the world…”

Mr. Sultan is not only a top-notch teacher, but he is also extremely supportive and helpful outside the classroom. He puts his students first; he engages with them through his teaching style. He is unlike any other teacher I have had. Therefore, he remains the best AP Human Geography teacher.

LITTERING IS AN ONGOING CONCERN AT LINCOLN 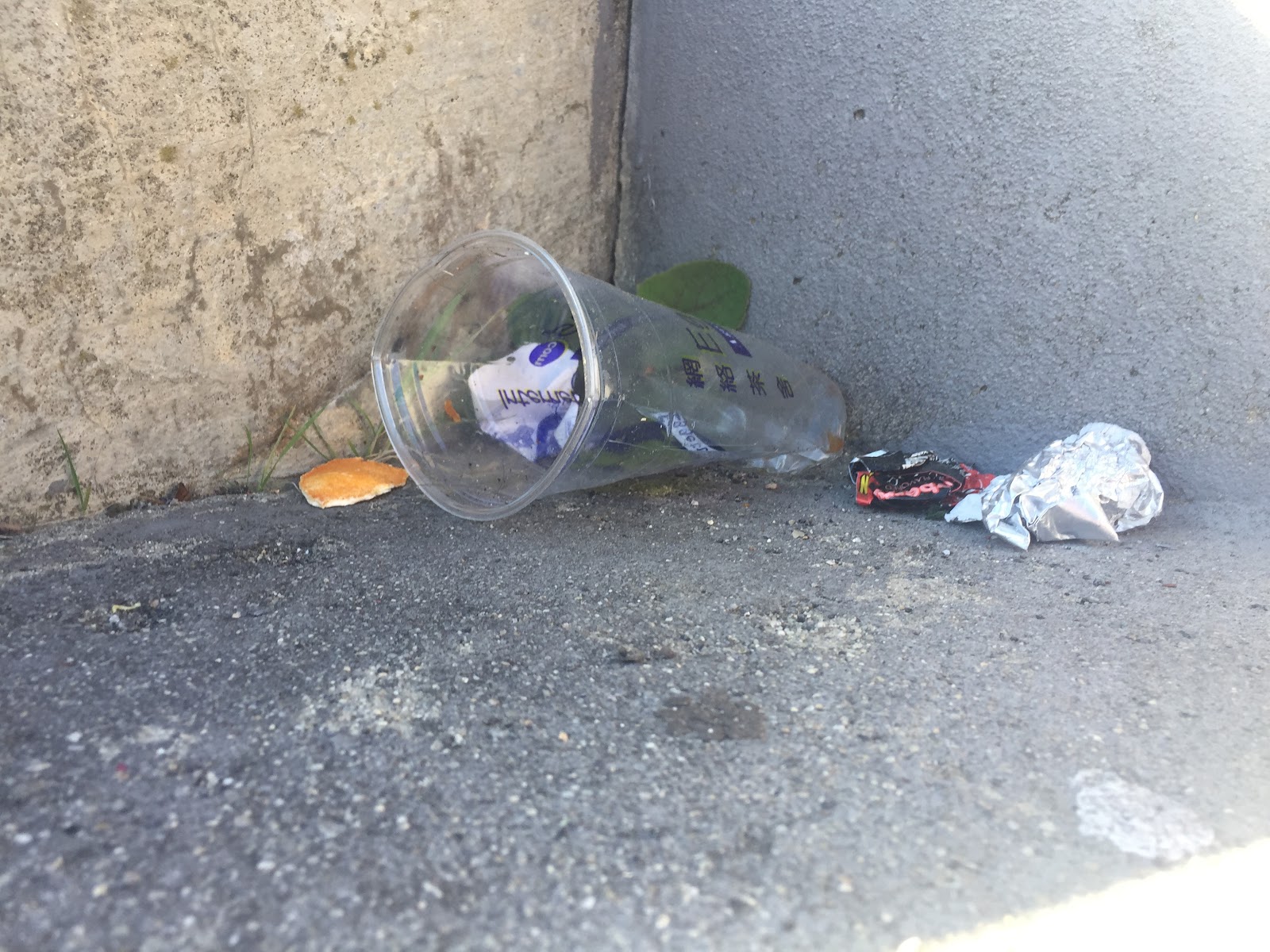 Plastic cups and wrappers can be seen near the stone steps of the courtyard. Photo by Nathan Gee

Over my four years at Lincoln, one ongoing issue that I’ve encountered almost every single day at school is the misplaced trash that is ever-so-present in our school facilities. As I walk up the steep stone stairs of the courtyard to class, I can see the lunch trays, plastic wrapping, and food containers scattered across the area in plain sight.

At a young age, many of us were taught to throw our trash in bins and to keep the environment around us clean for other people and the health of the surrounding environment. On the contrary, the action of throwing waste into a container is not apparent to some students at Lincoln. Some days, the amount of trash is not as severe due to weather conditions that keep students from eating lunch outside. Other days, the amount of waste is repugnant as it spreads across the yards, under the trees, and across the tennis field.

It’s even more disappointing since there are many available trash and recycling bins across the various areas of the yard at Lincoln. Although people may not realize it, littering in the yard has serious consequences that affect the faculty, students, and the safety of our school. 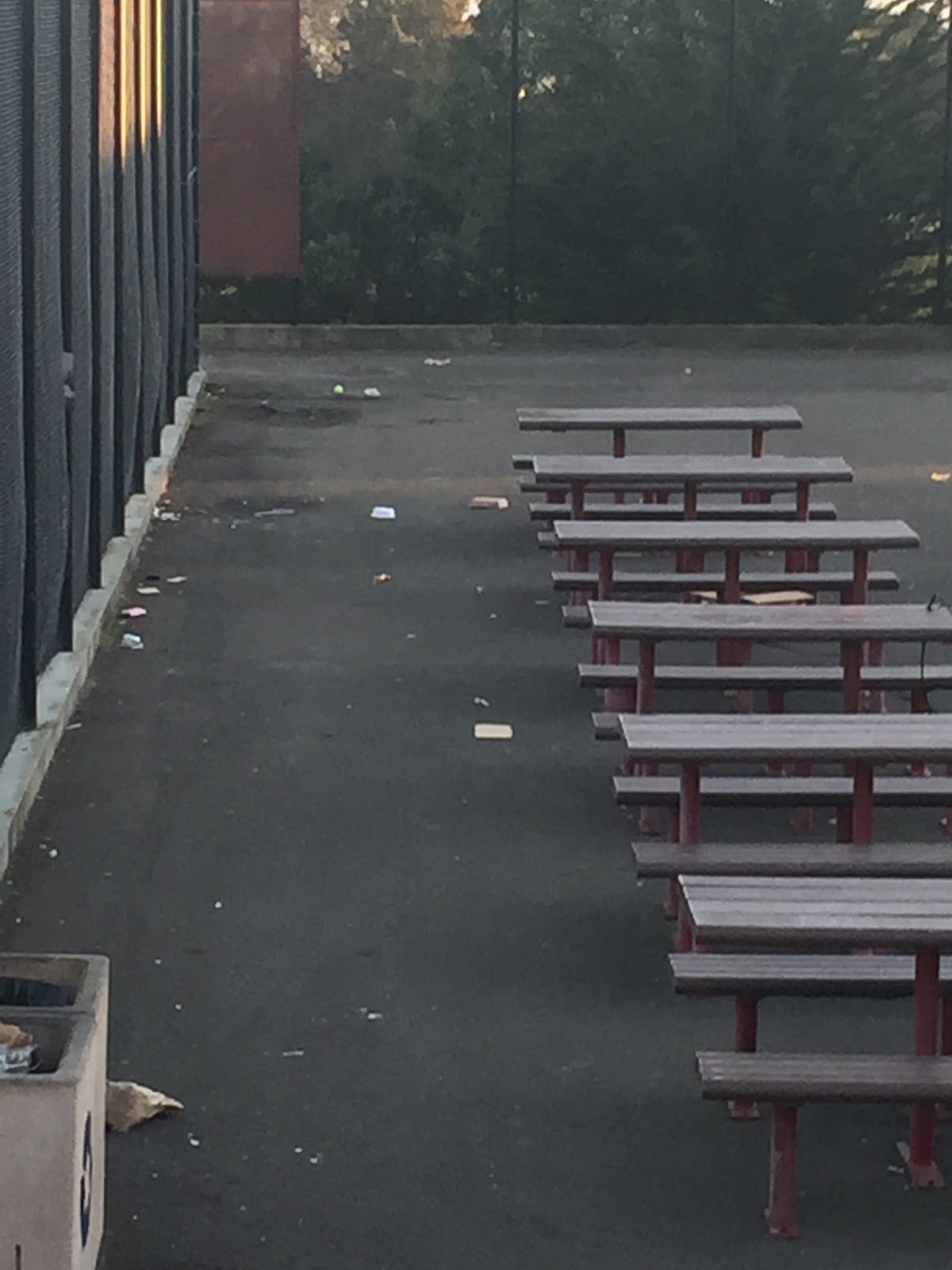 Despite the presence of waste bins, trash is scattered across the benches and cement of the courtyard. Photo by Nathan Gee

Problems like global warming and pollution have been significant issues that our education system has taught us about and that we have experienced through living in the city. Being at the forefront of the new generation, it is no surprise that many young people care about climate change and want to preserve the environment more than ever before.

Greta Thunberg, seen as a hero by many young activists around the world, is championed for her ability to voice her opinions and speak out to major corporations that contribute to the pollution of our environment. It disappoints me that the actions of students at our school do not reflect the care we have as young people for the planet.

Not littering may seem like a simple habit to maintain, but some factors cause people to litter whether we like it or not. Many people litter because they do not feel responsible for public areas as they see it as someone else’s problem, (i.e., the school faculty). Others are too lazy and do not care about where their trash ends up.

Social science research by Robert Cialdini, emeritus professor of psychology and marketing at Arizona State University and author of Influence: The Psychology of Persuasion, suggests that the behavior of humans imitates those around them; this plays a massive role in littering. Places with litter and trash cause people to litter more as a result. When someone sees litter already accumulated somewhere, it gives the impression that it’s the right place to discard trash.

By littering outside, janitors have to work harder than they need to to keep the school clean, especially as litter helps spread and foster disease when left uncleaned, in light of COVID-19. Students who litter seem to believe that it isn’t their problem as it is up to the school to pick up after them. Not only does littering make the jobs of our faculty harder, but it is also frustrating to see students litter right next to a trash can in the bathrooms. I feel like students know that littering is wrong, but their laziness or carelessness has caused them to discard trash away without thinking about the consequences.

Littering also impedes student activities. As part of the school’s boys’ tennis team, I’ve had issues of smashed glass bottles and heaps of trash littered around the tennis court. This forces us to take time off practice to clean the tennis courts almost every day.

Littering is also an issue for people who participate in club activities near the schoolyard as they also have to make sure their activities are not interrupted.

We, as students, should be aware of taking care of our learning environment and where we spend most of our days by cleaning up after ourselves and making the school a cleaner and safer place for all.

Our calendar is full of holidays. Whether it be Christmas or Mother's Day, every month is dedicated to some sort of holiday(s). The month of February is known and dedicated to the Black people of the world and is known as “Black History Month.” The month is used to show the importance and significance that Black people have had over the history of our country. Black History Month sheds light on civil rights activists like Martin Luther King Jr., Rosa Parks, Malcolm X, and many more. An important part of Black culture is music and film and the many difficulties Black people had to (and still) face to be respected in the industry and to create a positive brand for themselves.

Here at Lincoln, we have a diverse student body and we honor and respect holidays that many of our students celebrate and identify with. For the past month of February, English teacher, Mark Ruffolo, decided to open his classroom up during lunch to show films that relate to Black History Month. The only concern with this is that the movie that was being shown was “Black Panther” and, though Black panther is a great example of a Black superhero in this home of Africa and supporting where he comes from, it doesn’t have the depth of other movies that would be appropriate to show and also provide education.

Many movies that are about Black people focus around “the struggle” and how hard it is to grow up Black. Those are the movies we should be showing our students to help them understand how important this month is to their fellow peers. Instead of showing a cliché superhero movie that many watch just because Marvel produced it instead of the obvious message it is trying to send viewers that are willing to dive beneath the surface.

Many of the students that attended the lunch were simply there for extra credit that would be given to them by their other teachers. This is a good way to get students present but just because they are present doesn’t mean they are willing to focus on the message given and understand that it's not just a movie, but it is a message. Hopefully students can realize that months like this one and holidays like Chinese New Year aren’t just days off of school for nothing; they are holidays that are celebrated by many people to honor their heritage.

In recent times, we’ve seen a steep decline in the public’s trust for the press. CNN and Fox News are both known more for their bias than for the stories they present. Every news network, like a politician, has a political leaning. The public is aware of the plausible deceit news networks subject them to and therefore stigmatize them. When the media are mistrusted, many work to make it more difficult for them to use their voices. On a micro-scale, the trust of Lincoln staff, admin, and teachers in youth voices like the “Lincoln Log” have diminished and sources have been harder to come by.

In recent issues, “Lincoln Log” reporters have struggled more often to report on significant and meaningful issues at Lincoln because of a dearth of interview subjects such as those in authority.

Our job is to spread information, but we are unable to spread information that we don’t have. Lincoln students have a plethora of questions about school for reporters to answer. For a notable chunk of this school year, seniors didn’t know where graduation would take place. The latest changes to choosing classes brought up a new course of action for underclassmen to consider. The lack of an AP Chinese teacher brought worries to students hoping to gain college credit in May. These issues were all covered by the “Lincoln Log” but not without difficulty. For us to educate readers, we need to be educated ourselves, and interviews are the primary principle of administering that.

Donald Trump tends to avoid answering questions from news networks biased against him. Unlike big-scale news networks, the “Lincoln Log” does not intend to influence its readers with a political bias. We are here to report, not indoctrinate. We report situations as we see them and stay true to our perspectives as students. Holding back answers from the “Lincoln Log” only keeps the community in a state of ambiguity. Students have the right to be aware of what happens at school. We walk into school every day with trust in the administration because of the training they’ve undergone to do their job but that trust isn’t being reciprocated back to the students. This mistrust that the administration has for the students inhibits our voices from reaching their fullest potentials.